The project “Coffee’s sustainable development in Gorongosa National Park” between Brazil-Portugal and Mozambique, started in 2017 to characterize and implement a system for coffee’s sustainable production in this National Park. The project’s ultimate aims were to mitigate the effects of deforestation and of climate changes’ pressures, to promote agribusiness and to increase the performance and food security of rural families in the region.

Previously, by the end of 2016, Portugal and Brazil had signed the Memorandum of Understanding on technical cooperation for development for the benefit of third countries, framework under which this project was implemented. In fact, this MoU enabled the Brazilian Cooperation Agency (ABC) and Camões Institute for Cooperation and Language to finance and coordinate the initiative.

In addition, the project is executed with the technical support of the Center for Agricultural and Biological Sciences of the Federal University of Espirito Santo (UFES) of Brazil, of the Higher Institute of Agronomy of the University of Lisbon (ISA / ULisboa) of Portugal and Gorongosa National Park.These Brazilian and Portuguese universities have a long trajectory of collaboration in coffee research, both on production systems and on the plant’s reaction against climate limitations and its improvement. Thus, they joined efforts to support the development of human resources and of Mozambique’s agricultural technology.

Gorongosa National Park is one of Africa’s most emblematic areas in which wildlife has been restored. Since 2008 it is managed by a public-private partnership between the Government of Mozambique and the Carr Foundation, an American non-profit organization. The Park works in four main areas: biodiversity conservation, support to local communities, science and ecotourism.

In addition, the Project for coffee’s sustainable production in the Park has three main components that are impossible to dissociate: economic, environmental and social. The first one is related to improve quality throughout all the production cycle. The environmental component aims at recovering trees, which are key, among other things, to retain rainfall —preventing ground slides— and to recover the Park’s fauna. This component also aims at ensuring coffee is sustainably produced and that all practices are environmentally friendly —without using compounds that may be harmful to the Park’s fauna and flora.

Meanwhile, the social component aims at improving local people’s quality of life. This way, resources resulted from coffee sales will be directed to local development, for example, to the construction of schools and clinics, which will also have an impact on employment. Together with the above, it is worth mentioning that the project also contributes to scientific development through research activities and genetic improvement, as well as through higher education at masters and doctorate levels for Mozambican students, in the coffee area.

It is planned that the initiative will continue its execution until 2022 and it is expected that, by the end of this period, farmers, extension workers, technicians, students and researchers who have participated will have been trained in the improvement of current production systems. The elaboration of a manual of good management practices and on coffee’s cultivation management is also planned, which will be distributed free of charge to rural producers in Mozambique.

Source: SEGIB based on Cooperation Agencies and General Directions for Cooperation; Camões, I.P, Mendes Vidal (2018) and websites of  Federal University of Espirito Santo, the Brazilian Agency for International Cooperation and Gorongosa National Park. 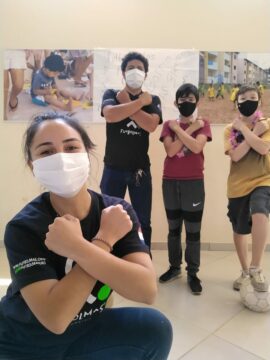 COVID-19 has led to a global health, economic and social crisis. We explore the response options based on lessons learnt after more than a decade of accumulated experience in South-South and Triangular Cooperation.

An analysis of the potential alignment of South-South and Triangular Cooperation promoted by Ibero-American countries with the Sustainable Development Goals.